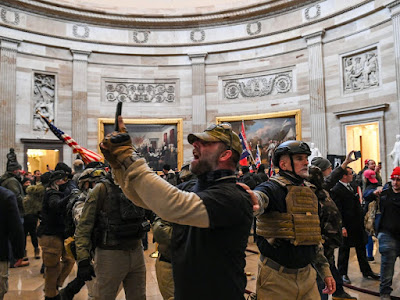 People usually ask me around the appropriate times: "What do you want for Christmas?" or "What do you want for your birthday?" My typical response is something like: "Bloody revolution." Most that know me also know my political outlook, which is one that decidedly contrasts much of America's and certainly the outlook that has come to embody America. Whereas most believe in and promote the idea of big business, everything for profit, what's good for GM is good for America, etc., I'm a Marxist. What that means is that I favor people over profits, whether it comes to labor law, environmental law, or any other rules of society. So, when I talk about "bloody revolution", my image is of a popular revolt based on a higher principle, rather than on petty prejudices and a demagogue. So, when it came to the events today around and inside the Capitol building, my primary reaction was a mix of disgust and humor. The humorous part was that all of these fools were following the commands of an idiotic con man whose true nature has been blatantly apparent for 40 years. The disgust was based on watching all of the institutions that are held so sacred by most Americans being brought to their proverbial knees by a bunch of ignorant QAnon believers and a large number of racist cops; many of whom are also supporters of that idiotic con man. (How can someone that stupid deceive so many people? Animal cunning isn't bounded by intelligence. It's an instinct that's well-served by people who want to be deceived in the first place. But I digress.)

First off, let's get one thing straight: Anyone invading the Capitol today should have been shot. Full stop. That's what any nation does when an insurrection is attacking its primary legislative body. If I were leading my much-fantasized bloody revolution, I'd certainly expect to be shot if I was in the halls of Congress or the White House. That's what happens when you're trying to violently overthrow a government. People tend to shoot you or at least shoot back when you shoot at them. These people should have been treated as the domestic terrorists that they are and been shot. The first few to go down would have scattered the rest to the four winds. This is how this normally works. But, instead, what we saw were repeated instances of police retreating from unarmed invaders, taking selfies with said invaders, and even letting them in the door in the first place. This was after the date of January 6 was singled out by both President Trump and anyone who casually followed this thing called the Internet for weeks. Everyone knew this was coming, so there can be no argument that the Capitol Police or the myriad of security forces in and around DC were surprised by what happened. The fact that they stopped to share photos with these insurrectionists demonstrates what the reality was: These cops supported this insurrection. The foxes were, indeed, guarding the henhouse.

This brings into stark contrast what happened over the summer, when actual protests occurred across the nation in response to the death of George Floyd. In those instances, since the protests were made up of non-White people and were in support of non-White people and protesting against their usual treatment at the hands of authority (Protect and serve!), those participating in those events were attacked by police as if they were the enemy... because we are, to their thinking. We threaten the institutions because we point out that those institutions are either flawed or malicious. That's never a good idea in a state that's beholden to a very few. Indeed, the starkest example of the difference in response to the two events were what Washington looked like then: 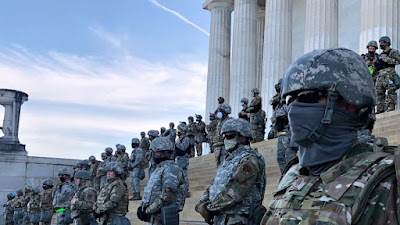 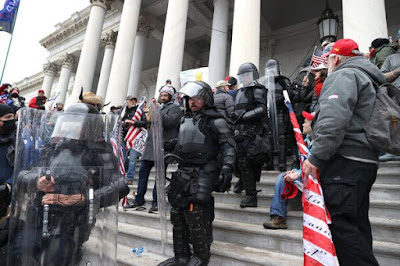 This speaks to not only orders given from on high, given the weeks of lead-in to this event, but also attitudes among the police themselves. After all, these "protesters" weren't Black! We're all in this together as fellow Americans, right?! This was cooperated with. Messages were sent from above that this behavior was acceptable in the corridors of power. (15 whole arrests today! Woo!)

And that's where the disgust really ramps up. Right away, you get the plaintive mewlings of government officials with the "This isn't who we are." line. This isn't America!, they say. This doesn't represent our grand, idealized vision of the city on the hill that, as one CNN reporter put it tonight, is the "anchor of democracy throughout the world." I nearly spit my water across the room because, you see, this is America. It totally is. This nation is seen as the "anchor of democracy" in many corners of the world only if your interpretation of "anchor" is something that weighs you down until you drown. This image- of self-entitled White people given free reign by cops to attack the legislature in the hopes of intimidating it to hand power to a would-be dictator -is absolutely America; especially when contrasted with what happened over the summer and what has happened to Black people in this nation for 400 years at the hands of authority, both locally in the form of cops and nationally in the form of Congress. This is so on brand for America it's almost as funny as it is disgusting. The "This isn't who we are" line is a dodge. It's an evasion that allows people to not confront this truth and pretend that real problems don't exist until everyone can move on to the next episode of The Mandalorian and forget that bad things even happened. It usually helps that the people using that line are the ones for whom those problems don't really exist (i.e. White, often wealthy) because they're never directly affected by them. 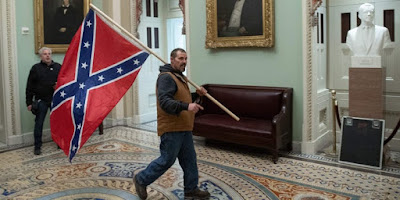 But that's another thing to keep in mind: This problem is far bigger than The Idiot, Donald J. Trump. This is the Republican party in a nutshell (with their often all-too-willing accomplices, the Democrats.) Trump may be the beacon in these insurrectionists' lives. He may be the one that keeps whipping them into a frenzy with lies that they love to hear and fantasies that can't possibly make sense. But it's vermin like Ted Cruz, Lindsey Graham, Matt Gaetz, Mitch McConnell, and Josh Hawley that have made this possible, among many, many others. They enabled this creature and looked the other way every time he committed crime after crime just like today, usually only after announcing that he was going to commit whatever crime that took place. (Someone tell me: Is Susan Collins concerned again? Or has she learned her lesson...?) This is the modern GOP and no one should ever forget what this party is: fanatical hucksters, dependent on ignorance, and completely devoid of any policy ideas that will improve life for anyone but the tiny sliver of the wealthy of which they are a part. This is a party so dependent on the Reagan religion, the tenets of which that have been so resoundingly disproved or rejected over the past 40 years that they can't reasonably be brought forward as actually popular ideas, that it can't promote anything but ignorance and fear; mostly of The Other (the non-Whites, the foreigners, the immigrants, the "socialists", etc.) Trump is the outward manifestation of this trend and they have covered his tracks at every opportunity; so much so that Cruz and Hawley have played to his base tonight on the Senate floor as prospective candidates for 2024. This is the Republican party and no one should ever forget what they've created.

The humor of today was also brought about by entities like the National Association of Manufacturers, suddenly realizing that widespread public violence might be bad for their profit margins, finally suggesting that Trump is unfit for office, two weeks from his removal after four years of perfidy. Or Twitter and Facebook, finally responding to the unending stream of lies that he spews forth that led directly to the national legislature being evacuated from its building by cutting him off their platforms; the same platforms that were used to organize this little revolt and which did nothing but promote his bullshit for years as a concession to "free speech", but really because they made money from it. As always in American politics, it's about the money. It's always about the money. Even the corporate media finally had to concede that perhaps "protesters" and "demonstration" weren't quite sufficient euphemisms for insurrectionists attempting a coup. CNN even labeled them "anarchists" at first. Remember anarchy? That thing you do when you're trying to keep the current government in power? Yeah. That. But all of this is reflective of the normalization of fascism. History is replete with examples of events like this, both within America (the Wilmington Massacre of 1898 (also racially-motivated)) and without (Mussolini's March on Rome in 1922.) Fascism is a solidification of corporate and political power and most major media sources are corporations, so they feed off this. Organizations like the New York Times remain eager to avoid buzzwords that might make anyone think that something is wrong with the American democratic edifice like, say, when the President is a liar or when people attempting to intimidate the legislature are staging a coup. That's why the term "anarchist" is thrown around. Anarchy represents change, so it's used to represent chaos, the lack of order (Law and order!), the undermining of authority, the breaking down of institutions. 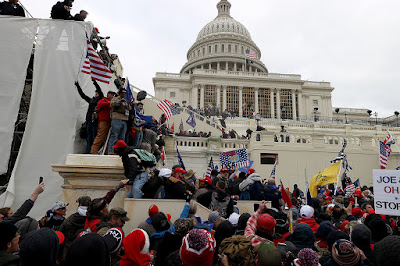 So, don't kid yourself when you think that America is "better than this." It never has been, because things like this usually lead to profits for the people that own America (exactly what the NAM was concerned about.) It's also a shining example of what the US has done, repeatedly, in other nations around the world, also at the behest of those owners (the term "banana republic", which many are applying to the US these days, came about because of the activities of United Fruit, the US Marines, and the CIA.) This is America. One of our two major political parties has simply begun saying the quiet part out loud; usually embodied in the form of The Idiot, but now also in his devoted followers who have been elected to the highest legislative body in the land. But his departure will not change anything but the façade. While every effort should be made to both arrest all of the participants of today's debacle (including the outgoing president) and expel all of the Congresspeople promoting sedition (It actually should be done, legally, per the 14th amendment.), there will still be much more work to be done. They and the people they serve will still own everything and will still work to maintain that situation. The only thing to potentially look forward to is the actual bloody revolution that might serve the interests of someone other than a minority of racist morons. I await that day with great anticipation.

Email ThisBlogThis!Share to TwitterShare to FacebookShare to Pinterest
Labels: fascism, historical ignorance, idiots and the world they have made, LOLPresidentTrump, politics, rant, revolution